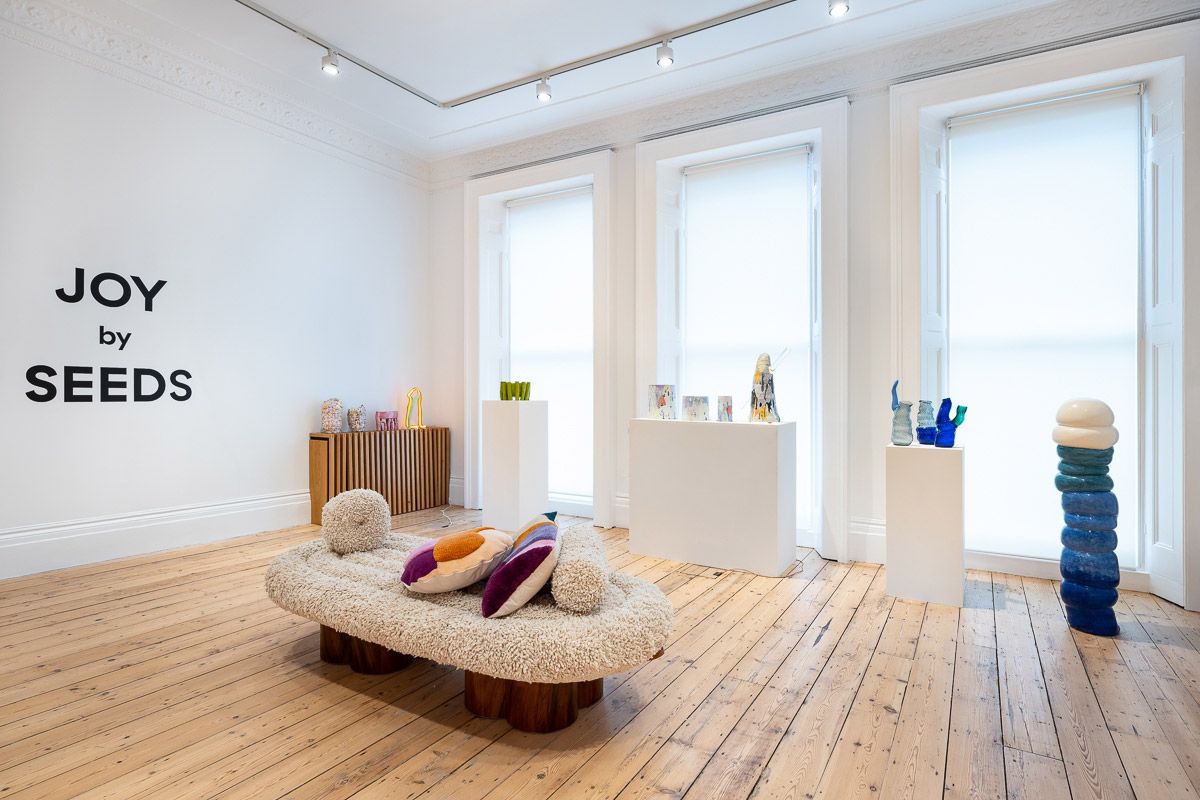 Hello everyone! This weekend in London it was held the London Design Festival. Within it debuted also Design London 2021, and, of course, I could not miss any of these. It has been a long time, and as many of you, I’m sure, I was looking forward to finally attend a live event.

London design festival (LDF), which I have covered in the past already, is a huge event that since 2003, every year, hosts hundreds of exhibitions. London Design instead was part of a new program lasting only 4 days and set in the new Design District of Greenwich. Naturally, this novelty attracted a number of high-profile brands, so I took my time to go around and discover the best that these two events had to offer.

I will cover other aspects of the event, but I would like to start with my favourite exhibition. Situated in Kensington, it was called Joy by Seeds.

The Joy exhibition was part of the Brompton Design District, and it was based on the expression of the concept of Joy. 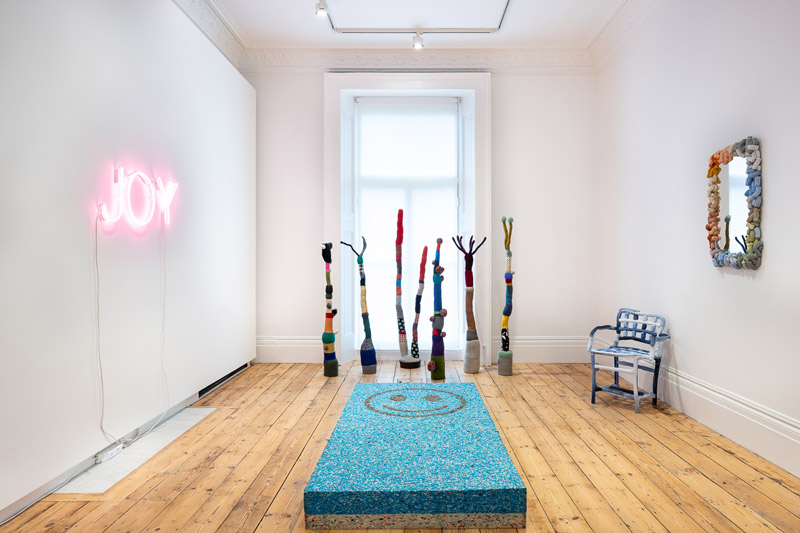 The idea behind the exhibition revolved around how our surroundings influence us and our physical and mental wellbeing. As a result, they influence our emotions as well. So, interior objects that instil joy in us can help us harness this positive energy and ultimately improve our lives.

This is not only a concept dear to many interior designers, but one that is shared with sustainability principles of interior design, and especially with Biophilic ones, as we discussed in An introduction to biophilic design. According to Seeds, joy comes

“through unexpected juxtapositions and compositions that are playful and pleasurable; through unconventional geometrics and chunky shapes that reminds us of generous embraces when people were longing togetherness; through soft materials, textiles that embellish the experiences sensorially and emotionally; through crafted stories and poetic messages of hope that celebrate the possibility of a new day and a new chance.”

The result of their work was a collection of playful and creative decorative pieces obtained with a number of different techniques. And it recalled as well the theme of sustainability as many of the pieces were obtained by recycled and upcycled materials. Let’s go through some of my favourite pieces displayed:

Going in order, the first was Agnes Studio from Guatemala. With their Lana Daybed, the two designers explore the potential future of Central American aesthetic in a contrast between past and future both in terms of production processes and materials. 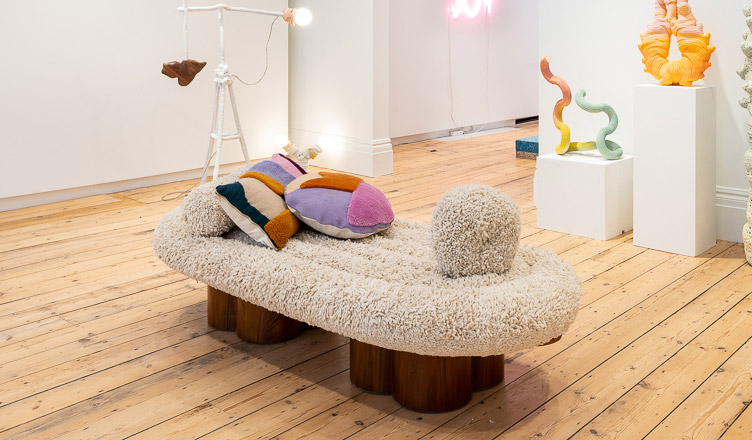 Another outstanding example was the one from Eusebio Sanchez, he used the coil built sculptures exposing it to the viewers as they usually don’t get to see it. It is a way to celebrate the first use of clay recorded in Japan, and to show the freedom of the process by “Taking the coil for a walk”, highlighting a journey that in his words “I know where I want to start, and have a notional idea of how I want it to look”. 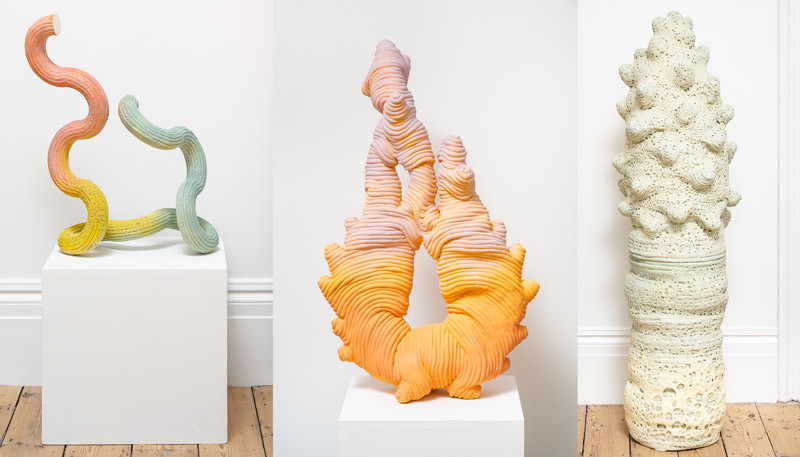 Jerszy Seymour Design workshop and Milan based group Macao brought the New World Projects Mattress. A mattress obtained from recycled foam that serves to hypothesise the creation of a utopian industry in Milan. An economic infrastructure based on innovation through the use of crypto-currency and cooperation. 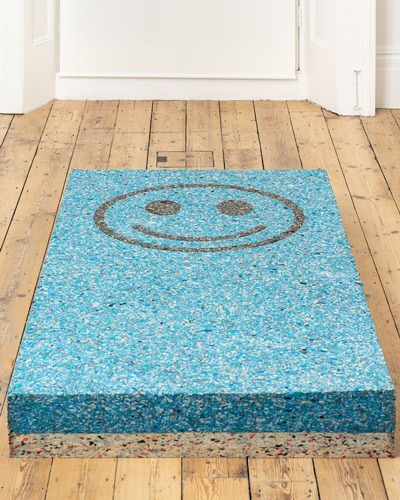 Two series of works from Jochen Holz explore light and materials connotation. The first piece is, in fact, a neon table light. It looks into the different possibilities offered by new techniques and materials to change the ‘traditional’ neon. In this way, not only the object but the light itself changes assuming different physical qualities.

The second series is made of glass items, completely or partially tinted in blue. This is done to investigate how the perception of the material might change from its regular “invisibility and fragility” connotations. 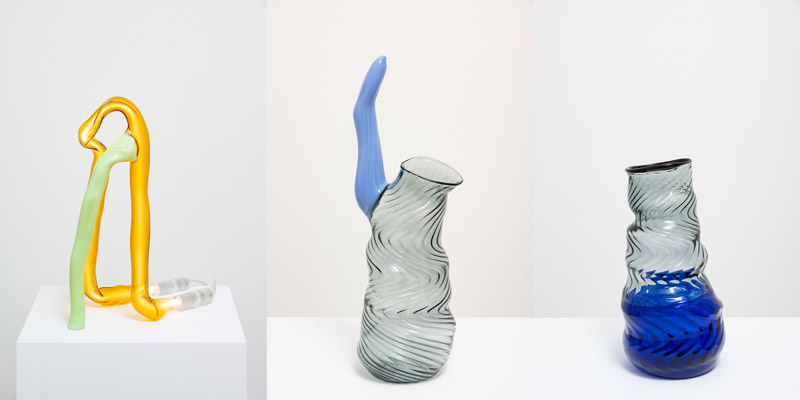 Butter stool is a creation by Marco Campardo. His project looks into the rotational moulding process which is usually employed to create mass-produced plastic objects. The objective here is instead to transform it into a way to create one-off items, giving it an artisanal vibe. The stools are made using polypropylene with mould obtained from hot glue and adhesive tape. The imperfect result makes each object unique. 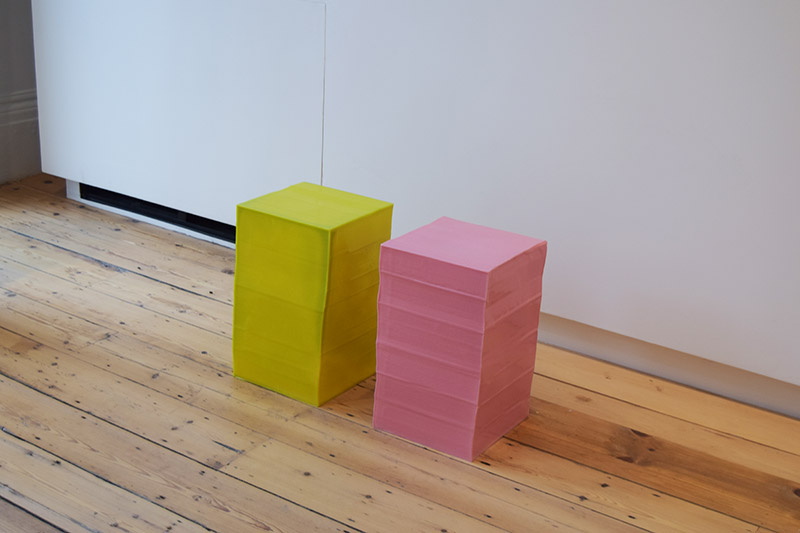 I found these stools not only ethical but also beautiful. I was surprised to hear that they were made of plastic since they look quite shiny and at first I assumed they were made of ceramic and that therefore they were quite fragile. But they are unexpectedly lightweight yet sturdy. Plus, I love the idea of finding a new use to a machine that was conceived for the mass production of plastic.

Last but not least, probably my favourite display was the one by James Shaw. The artist and designer has worked with plastic for years now and the pieces displayed are all based around a technique developed thanks to “plastic extruding guns” that he created himself.

This tool allows Shaw to create unique pieces and effectively turning an industrial product into a design one. What we get is a playful and colourful object with great visual interest that adds value to the material itself while also being sustainable. 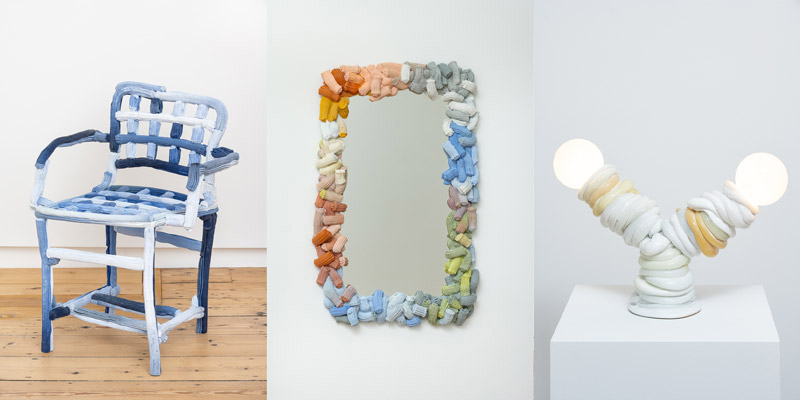 I was very fascinated by his collection and I am secretly planning to save up and one day buy my own piece from it (I loved the chair!).

This was my personal list of favourite items displayed at the Joy by Seeds exhibition. More in-depth on these two great design events will follow. In the meantime, let us know if you liked my recap or if you’ve been yourself and found some more interesting things you’d like to see covered here on the blog.

No thoughts on “London Design Festival and Design London 2021: Joy by Seeds”