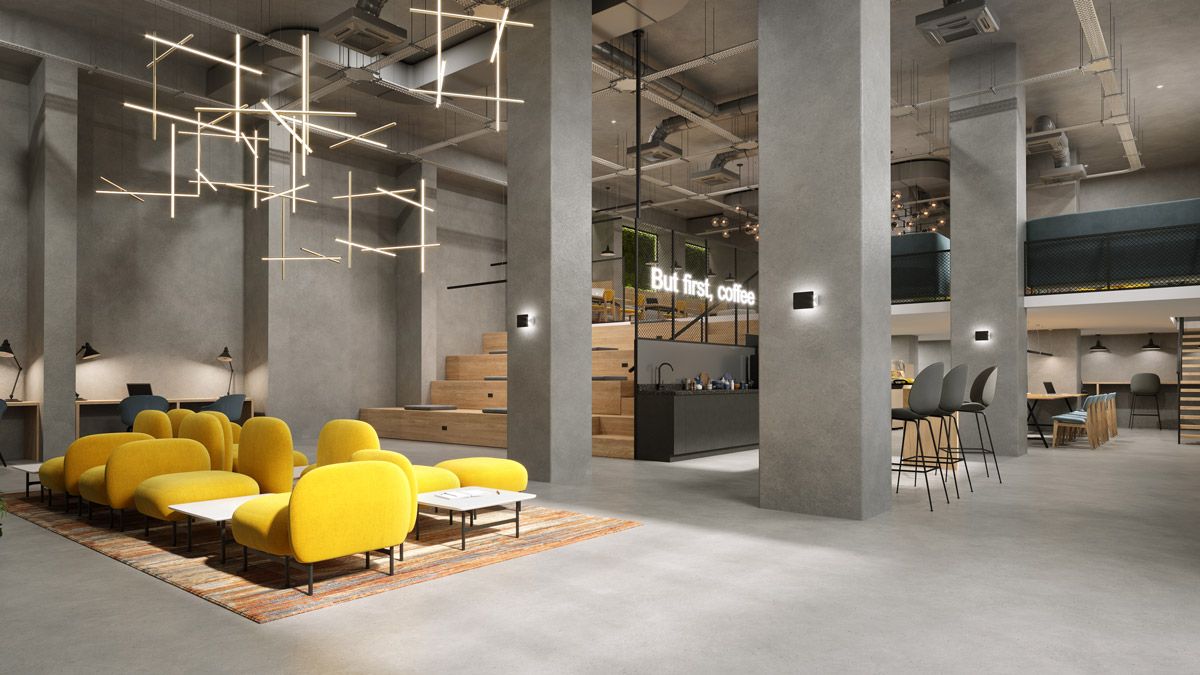 We recently had the opportunity to design the interiors for a new project that had a specific brief. While still being a student accommodation, we were asked to make it suitable for a more adult audience of young professionals, who still might prefer to share their working space with others, but are already starting their career.

With this premise, I was able to implement an Industrial look, which is definitely one of my favourite styles in interior and giving it a chic twist. So, I thought it’d be interesting to go in-depth into this popular interior design style, discuss its origins and its evolution in a modern interior space through our project’s development process.

Let’s start from the past...

The whole movement was born around the late 60s, and grew increasingly in the following decades, when, after the war, the large industrial buildings once focused on the sole production of goods, were abandoned and later needed to be repurposed.

The buildings were developed with open floor plans to facilitate any industrial operation and with the least amount possible of décor or unnecessary items that could complicate either the work or impact the safety in case of emergency. Then, in the early 20th century, as industrial capacity grew, industrial plants kept becoming bigger and bigger. So, they were gradually moved to the suburbs or remote areas outside the cities, which left the urban ones empty.

This led to the transformation of these large uncluttered spaces into residences. Industrial constructions were converted into lofts, and studios, which became popular as they showed much more personality than regular residences built in those years.

Nowadays, industrial is extremely popular, and it has since also moved beyond the residence in an old factory. Now you can find its principles applied in every kind of private home, as well as in commercial spaces. There are numerous chains of shops, particularly in fashion that use it as an effective way to communicate to their target audience.

In its modern version, while fascinating, industrial design has to be employed with care, or the risk might be to get a rough look. Instead, even if, from time to time some implementations might seem shabby or run-down, the thought that goes behind them is significant.

In its iteration referred to as “Industrial Chic”, the industrial style gets an even more refined and minimal component. A different approach goes into the choice of furniture, colours, materials and lines.

Our project for Nido Student in Dresden was the perfect opportunity for us to use this style and apply its many features to a student accommodation. The initial design was developed by Imtiaz Ashraf. To implement our brief, we had to consider several details, so let’s go through them together.

How to implement The Industrial Chic Interior Style

To give an idea of our process in creating the design for the project I mentioned, I rounded up a list of steps or variables to consider when implementing an industrial chic interior.

This is more of a prerequisite (hence the first position). While you can pretty much choose the style you prefer for an interior, with Industrial, precisely because of its origins, in a regular building the risk is to get a look that is not authentic but actually seem artificial.

In our case, having a large empty existing basement with a double-height concrete structure luckily allowed the use of this style successfully. 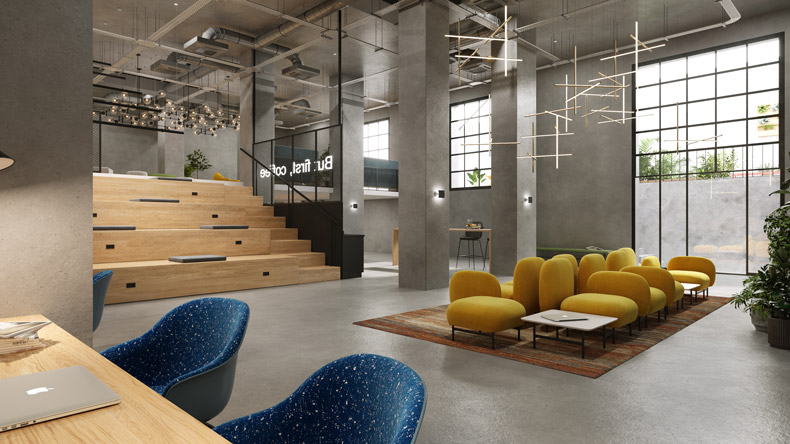 2. What do you want to communicate?

We don’t just choose an interior style because we like the colours or the materials, we do it to communicate something specific, much like what happens when we dress up in a particular way or we wear a unique piece of clothing.

Differently from other student accommodation projects we developed, this time we had to convey a more adult look. The space, not only accessible to students, had to appeal to a demographic of young professionals as well. People that would usually spend time in a co-working space. And the Industrial Chic style achieved it perfectly. 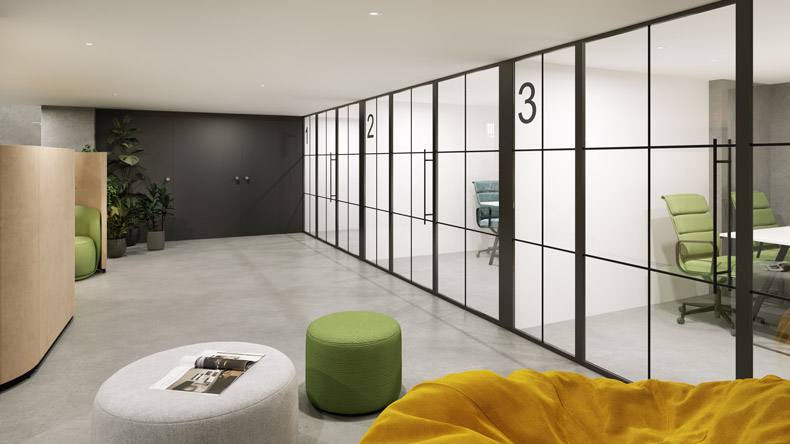 This is, of course, one of the first features that catches the eye in an interior. Industrial is, by definition, quite minimal when it comes to colours choice. The dominant ones are usually white and black, walls or even bricks painted to contrast the metal frames or dark-coloured pieces of furniture. Brown and green, thanks to timber details, furniture pieces, and plants.

These main colours can come in different shades, such as grey, light or dark, or brick red when the wall is exposed and not painted, which is also a popular option.

Industrial chic generally allows for a bit more freedom in the use of colours, in order to obtain a more refined appearance, as long as they are a few. For this interior, initially, there was mainly grey, black accents and some wood here and there. We lightened the mood using more timber, adding greenery, and picking two colours for the accents throughout the whole interior. Yellow, with some blue for furniture pieces and seating.

The composition maintains its industrial look but also conveys a more homely and relaxing atmosphere. 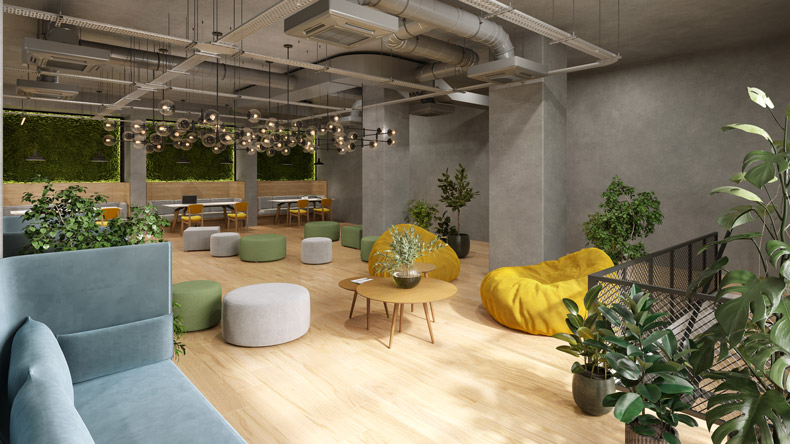 The main materials used also for furniture, objects, and details, are stone or bricks, metal and wood. The prevalence of metal and bricks can make an interior look quite stark. This is usually fixed through the use of art or other details.

In this case, being a working environment we wanted to keep it as simple as possible, so we softened the whole space through textures and materials. We used more textiles, for furniture pieces, and carpets, as well as upholstered seats, poufs, and sofas. In the mezzanine, we also used moss walls to bring a biophilic element and add a further element of calm. The lighter shade of timber contributed too to the effect we desired.

Lighting is one distinctive characteristic of industrial interior design and one that sets industrial chic apart from it. It surely did for us, as it was one of the most important features to obtain the look & feel our client wanted. 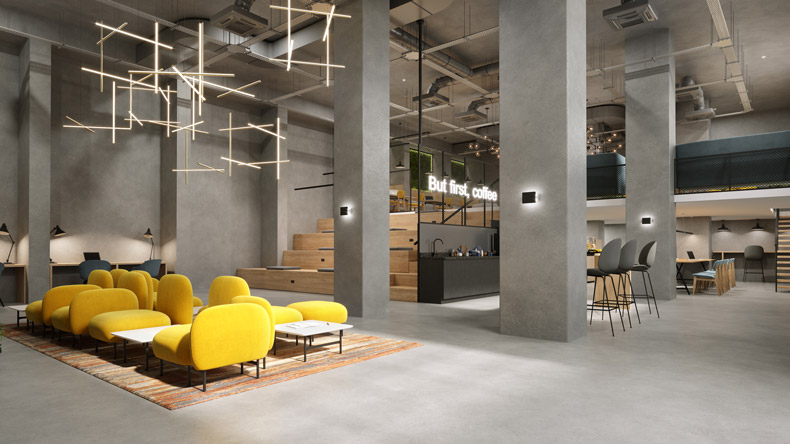 In our case though, the different choices helped us defining very well our objective as well as the character of this space. The bespoke chandelier we used for the double-height, definitely adds to the chic and refined look of the room, making it also more interesting.

Without that careful balance of elements, the risk is to give the space an almost grim look. So, lighting played an extremely important role in this project. The temperature too, in fact, was important. We picked a 2700K temperature to give the right warmth to our lighting, and it shouldn’t be more than that.

And here it is. A review of the Industrial Chic style of interior design through our latest project. It is an interesting opportunity to give a new and unique twist to an industrial interior project by adding some unexpected and refined-looking elements that can radically change the final result.

You still have time to Vote for A Designer at Heart at the Amara Interior Blog Awards!

If you like our content and find our articles useful and insightful then you might want to consider voting for us at this important Award! It would mean the world to us!

It will take just a few seconds. You can vote HERE or tap on the image below!
Thank you all!