Interior Design according to Vastu Principles: A residential refurbishment project 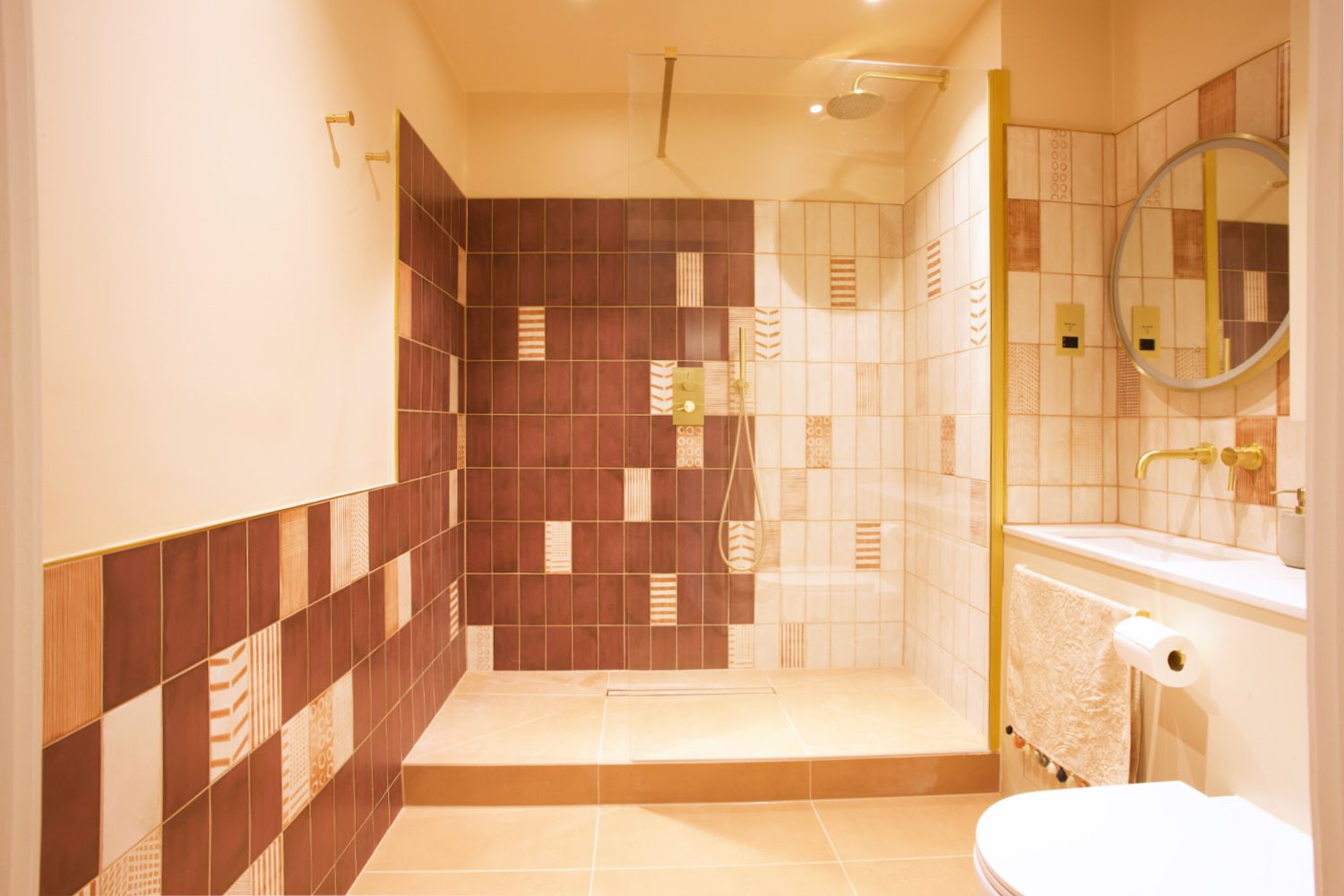 Today I would like to talk about one of our latest projects. A residential one this time. It was quite unique since we were asked to refurbish a small flat in London and develop it around Indian Vastu principles. Vastu is a traditional Indian architecture system. In Sanskrit, the word vāstu indicates a house or dwelling place as well as its corresponding land.

It is an ancient and complex discipline, so to develop specific rules for this flat, our client hired an expert that collaborated with us. But first of all, what is Vastu? Let’s try and go a bit more in-depth to see what’s what.

Vastu Shastra is the title of a series of texts, whose entire name means “science of architecture”, that describe the Vastu Vidya principles. These aim at integrating architecture and nature, often expressed with its four basic elements, fire, wind, earth, and water, through layout, measurements, geometric pattern, symmetry and directional arrangement rules. 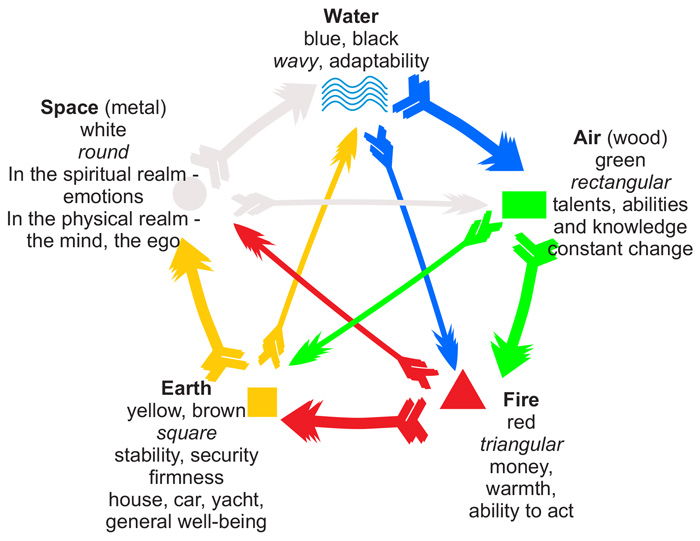 Because these rules are not perfectly rigid but are adapted in different ways to different spaces, it is often involved a person with particular knowledge on this topic.

The numerous traditional texts of Vastu apparently often describe the principles for Hindu temple design, but also include other kinds of dwelling places, taking a holistic approach to the community living in a place. So, there are different levels to be considered for homes, villages, gardens, and more.

Different rules to design a space, are defined through the use of Mandalas. These can be different and organised around a central point in the house, or building, that changes according to the mandala used. These often consist of square grids. But, since they do not represent strict regulations, instead they are more like a set of guidelines, they are adapted to spaces that have very different layouts.

Most of all, the principles seem built around central and peripheral zones, directions compared to sunlight, and to specific functions of each space. Modern examples are several, such as the Jawahar Kala Kendra centre designed by architect Charles Correa. 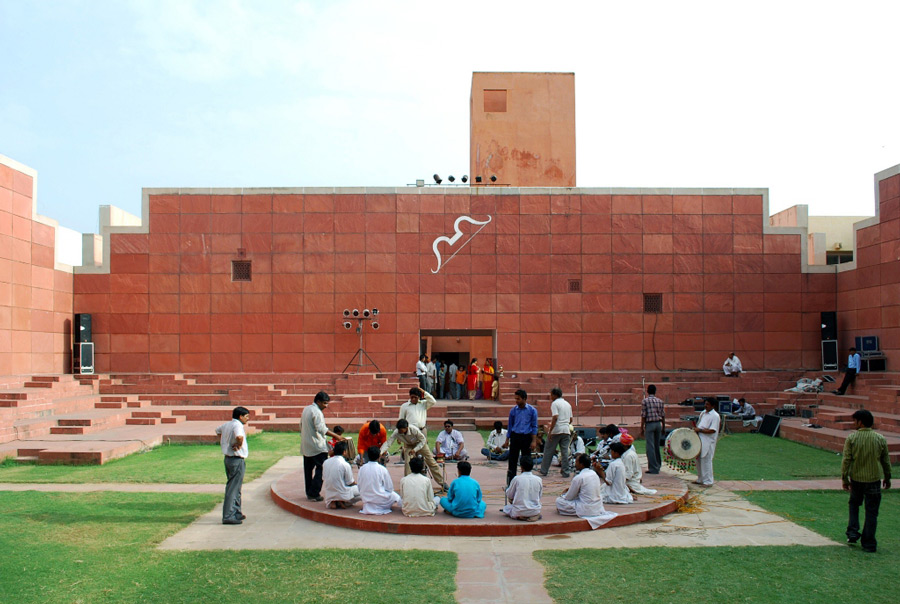 These are just a few superficial indications about how Vastu principles often define spaces. Naturally, there is a huge body of literature about Vastu that we do not tackle here as it would surely result in an incomplete and diluted version of the original principles in all of their complexity.

As mentioned, for the project we followed an expert was hired and he defined a set of principles according to various systems.

Using the 12 Houses of the zodiac, he identified which areas of life, both in a physical and spiritual way, are affected by certain spaces and how.

Then he used Mahamarmas that represent sources of energy in the space to set it into a mandala grid with reference points. These range from -8 to +8, with the negative ones being those inside the walls or outside the flat, that due to their position don’t feed energy to the residents. Following these, he suggested some corrections of the Mahamarmas and the placement of coloured or metal corrective strips along the outer walls of the Vastu Purusha mandala.

He then also suggested the placement of some geometric shapes corresponding to the position of the 5 major Mahamarmas each, one per natural element plus a fifth for the space in the centre. 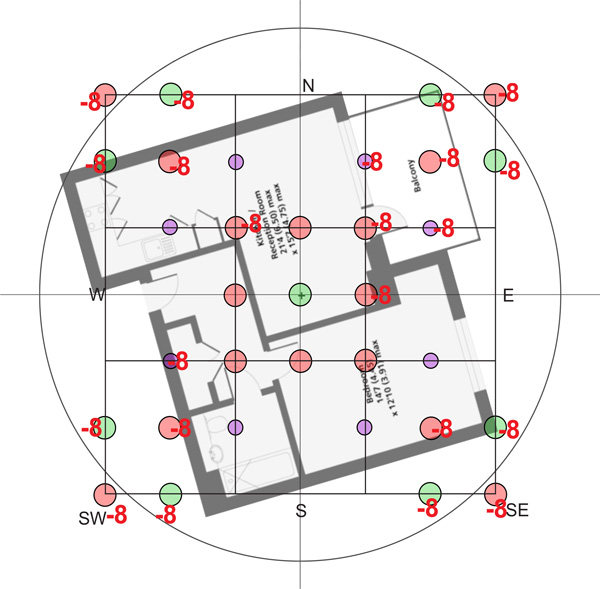 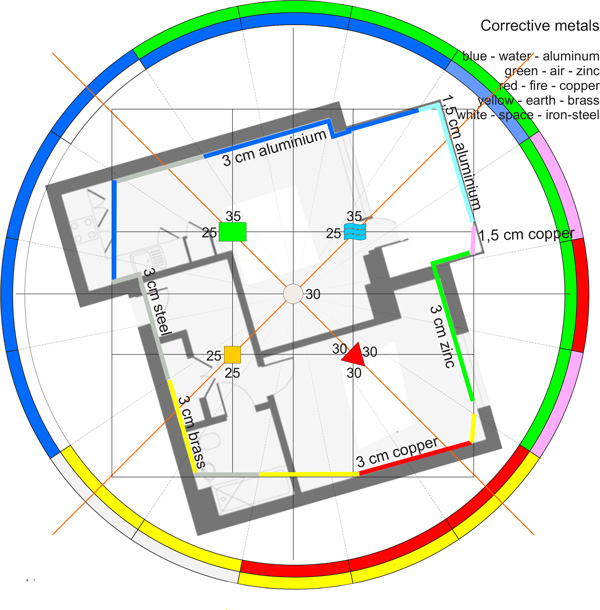 The next step was the analysis of the wall paint. This too was indicated by the expert to balance the energy of the house. In the graph below the outer rim of the circle indicates which zone affects which segment of life. He then suggested a series of colour palettes from which we had to select one for the actual flat refurbishment. 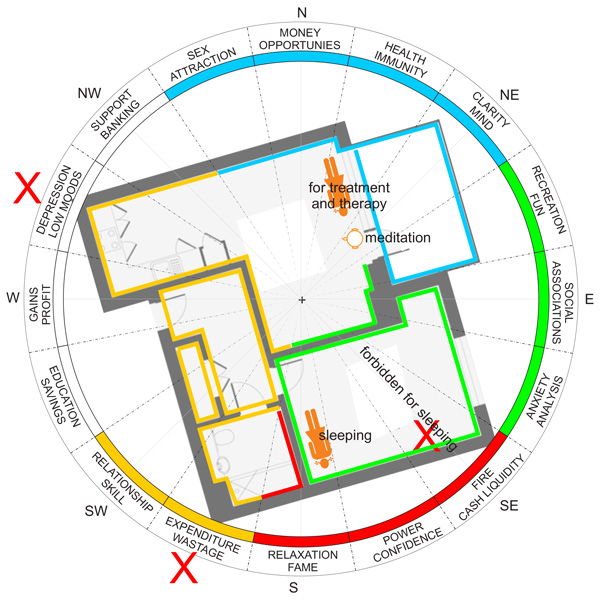 The whole analysis went a lot deeper after these, analysing single elements such as the entrance, positioning of interior elements, and lighting depending on the energy levels required. But now let’s have a look at how these affected and shaped our design choices.

As visible from the floorplan above, the bathroom walls were “cut” in a specific point by a diagram’s line, and a different colour was suggested for a part of it. To achieve the required design, we picked a set of beautiful Italian decorative tiles and changed the colour to the exact point of the wall required.

To make this colour shift more fluid we used throughout the whole wall some tiles that instead of a solid colour have decorative patterns. This way, we added variety and it doesn’t look like a harsh shift between two solid colours. 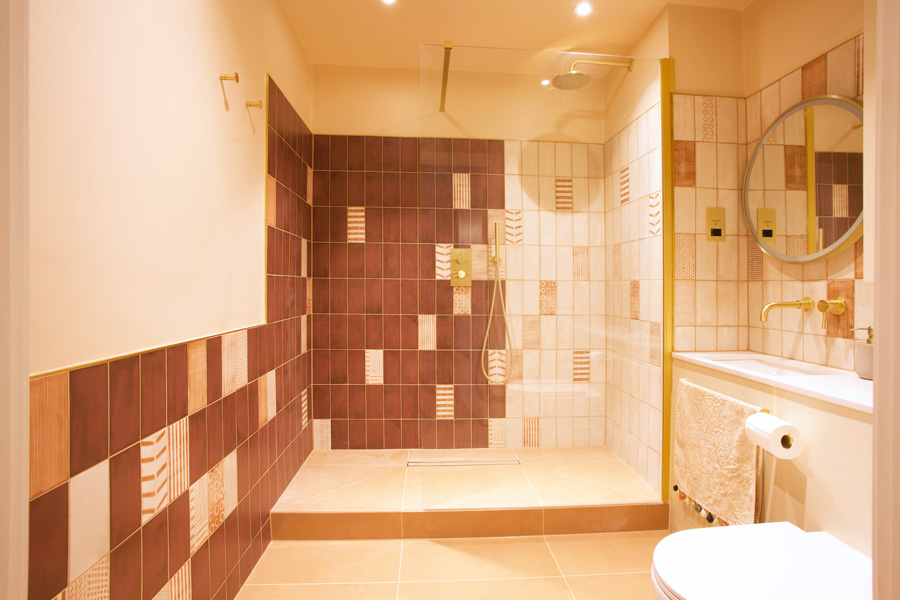 For the rest, some brass elements were required, so we applied them creating a relaxing boheme style for the whole bathroom.

To make the space more refined we concealed the toilet cistern, that was external before, in the wall. We also fully integrated the sink within the same unit, and to leave more space the faucet has been subsequently moved on the wall right above it. This also helped giving the whole space the cleaner and more refined look that our client was looking for.

For the same reason, she also wanted to remove the bathtub and substitute it with a shower. So, we did it, but to make the final result more uniform, for the step of the shower plate we used the same tiles of the floor. The final result was perfected thanks to the work of Internideco.

To improve the functionality, we added storage and changed the radiator, using one that had the towel-holder integrated, and specified it in the same bepoke RAL colour of the sink unit. 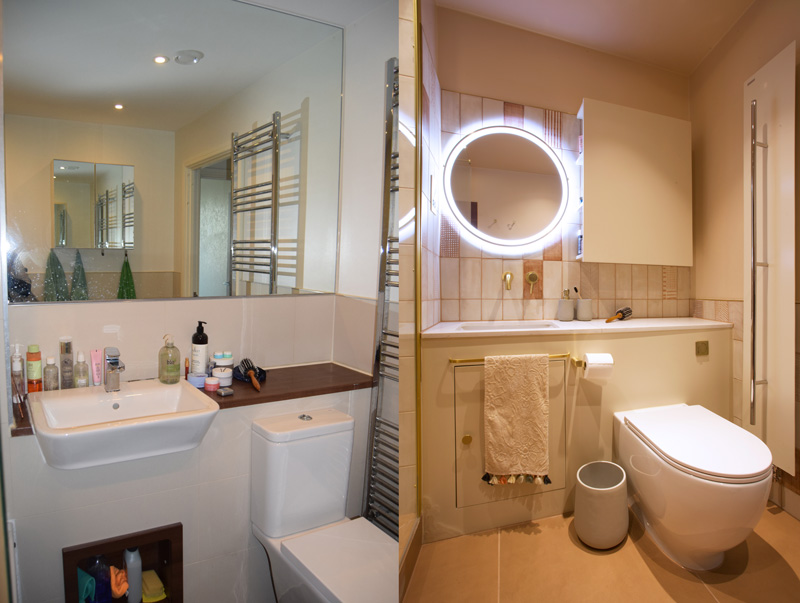 *bathroom before and after

Finally, we painted the rest of the walls and ceiling all with the same colour to make the space more uniform and minimal using fewer colours.

For the kitchen space, after a visit to the showroom along with the client, we picked a unit by Scavolini, an Italian manufacturer.

Due to the regulations of this part of the house, we could not move the sink, fridge, or other elements. But our client did not want the kitchen space to stop in the living room with just the side of the fridge visible from it. So, we selected a shelving unit from Scavolini that has been installed in the final part of the kitchen unit which not only finishes the area but also adds a nice element to the living room view. 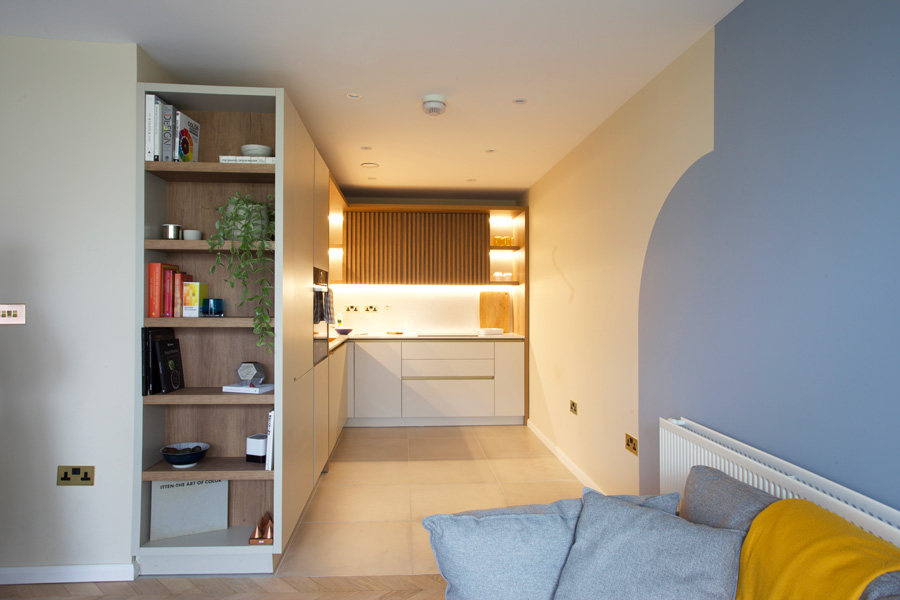 For the kitchen finishes, we got some bespoke milled panels made again by Scavolini which recalled the Boheme style used also in the bathroom and added some texture to this area. To complete we also specified a coordinated timber frame.

The kitchen worktop and the splashback have been completed in quartz, and because our client liked a minimalistic space, and did not have too many things, we kept the space more open and airy, adding LED strips above the shelving instead of adding more closed wall units. 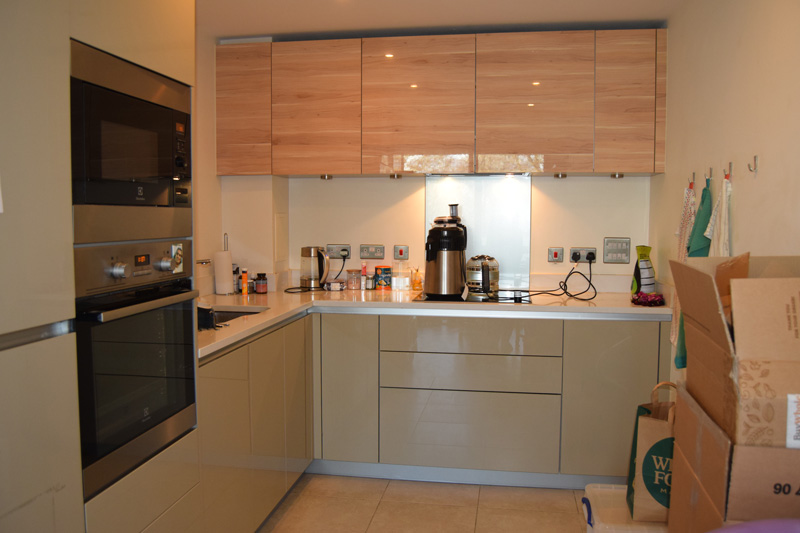 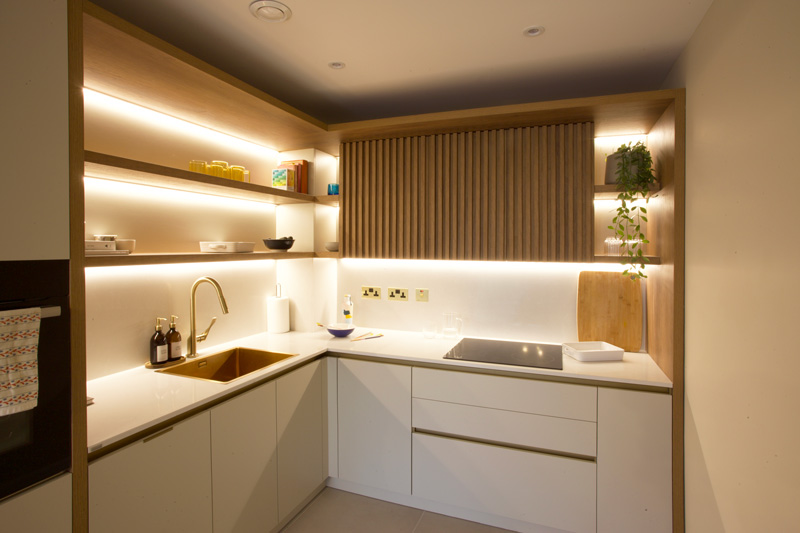 The bedroom has been painted using the colour palette suggested by the Vastu expert. Here we had a nook that was perfect for a bespoke wardrobe which would have been quite expensive though. To find a more cost-effective solution, we specified the internal part of the wardrobe from the Ikea Pax line, and the doors were instead completed by Internideco. We were very happy with the final result that really gives a look of a fitted piece. 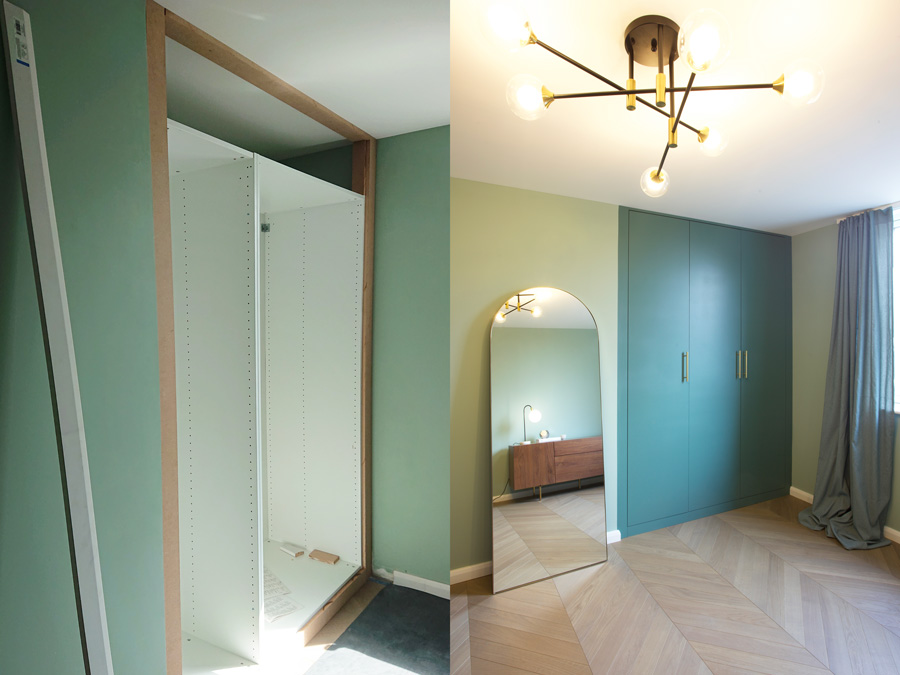 In the living room, to obtain a more consistent look, we changed the paint where needed using rounded shapes, that have been repeated through pieces of furniture. 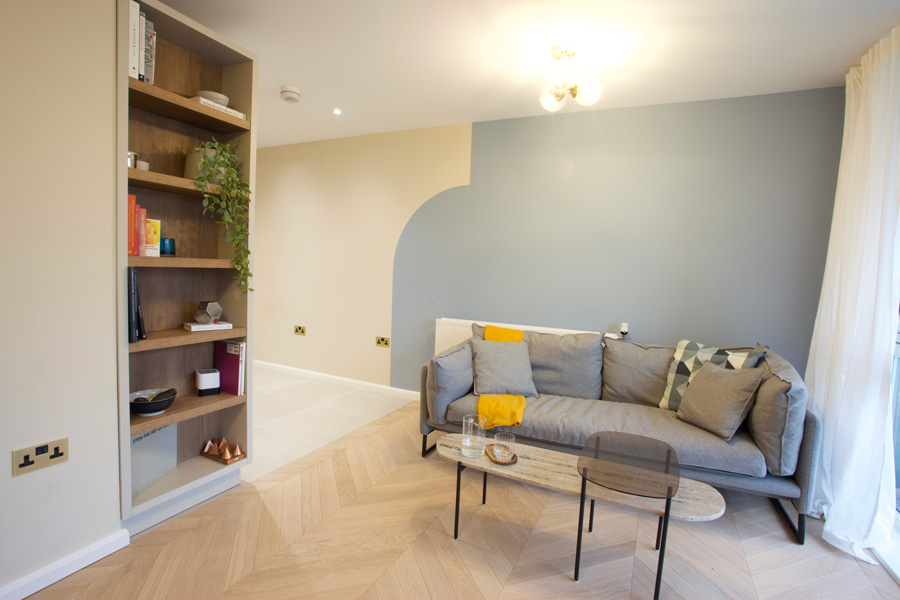 The only element that our client had already picked was the flooring material. A timber chevron oak in two different finishes. Since one was in a brighter shade and another outside the room in a darker one, Internideco once again thanks to fine craftsman work completed this detail by cutting the tiles so that the floor pattern looks uninterrupted despite the colour change.

This was so far the most interesting residential project we developed as A Designer at Heart thanks to the interesting cultural mix and style required. Working closely with our client we were able to develop some interesting solutions, that looked good and satisfied her refined and minimalistic sense of style.

No thoughts on “Interior Design according to Vastu Principles: A residential refurbishment project”