Feng Shui: What does it mean and how it is applied to Interior Design 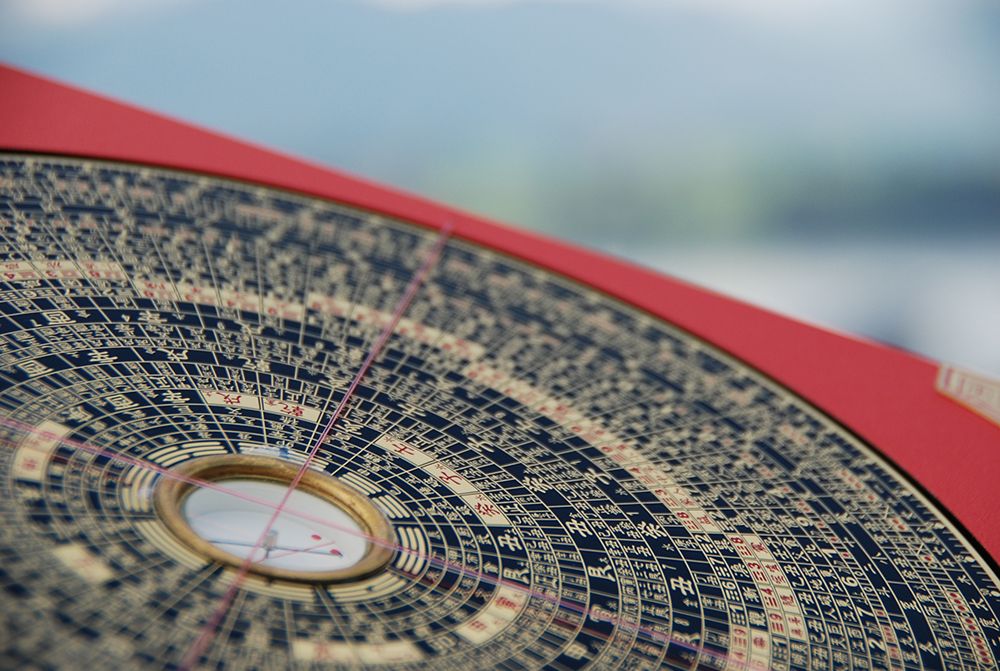 We talk a lot about wellbeing in interiors on this blog, so much that the topic of Feng Shui easily came to our minds when I and Rick were trying to decide on the next topic for a post. And though by no means we are Feng Shui experts, we believe in the deep relationship between humans and their environment (we are all connected through a flow of energy). This idea that by forging a new relationship with our spaces we can become happier is what Feng Shui is about. So let’s start from the beginning!

Feng Shui is of course a Chinese word, and there are many interpretations, so to properly understand its origin and meaning, let’s go to the basis.

The word is composed of two characters 风 (Fēng) and 水 (Shuǐ), which mean Wind and Water respectively. Its first historical record is found in the ‘Book of Burial’ by Guo Pu, a poet, and historian who lived during the Jin Dynasty (266-420 AD), even though some of its related techniques are much older. And now you might think “book of burials? What does a funeral rite have to do with Feng Shui?”

Believe it or not, Feng Shui is in fact connected to both. Residential and burial sites. Homes and graveyards.

In his book, Guo Pu wrote a few verses that could roughly translate with: “Qi, is scattered riding the wind, boundary stops water. The Ancients gather to not let it disperse but to stop it, so it is called Feng Shui”

In more academic terms it was also called geomancy. Feng Shui studies the environment and the laws of nature. Since the man is a part of nature, nature is also a part of man, expressed by the Chinese idiom “天人合一” (Tiān rén hé yī). The core idea of ​​Feng Shui is the harmony between man and nature to achieve "oneness between man and nature". So, guess what, Qi is a very difficult concept to explain, but it can be exemplified by saying that it is an energy that is both part of us and of our surroundings and it is strengthened by the synergy of everything becoming one.

Early feng shui mainly concerns the location, orientation, construction, and other methods and principles of palaces, residences, villages, and cemeteries. 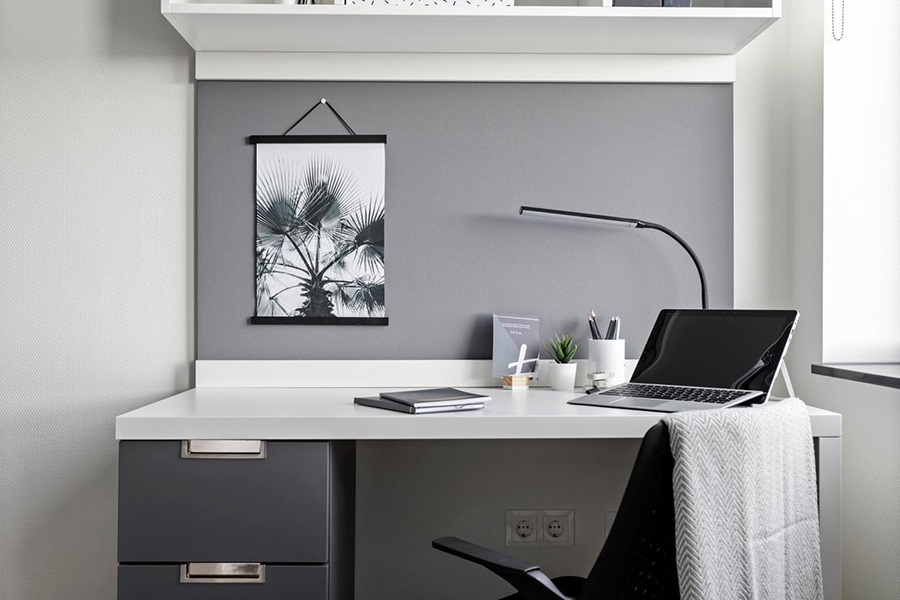 Nowadays, Feng Shui has evolved translating into guidelines that are applied according to modern standards to architecture and interior design. There are principles, inspired by the traditional philosophy, that can be employed to encourage mental and physical wellbeing, we well as good fortune. Let’s first see some basic assumption often mentioned as Feng Shui principles:

To receive energy (or Qi) and feel relaxed in a space one should always be mindful of its surroundings, getting rid of things that are not used regularly or just take space, and adding instead items that make us happy. Energy should flow in an interior, and never be stagnating. As should light and air, which will both contribute to your wellbeing.

For the same reason, the entrance of a house (which is the main energy source) should always be kept tidy and free of clutter. After all, Feng Shui is about the flow of Qi.

Balance is at the basis of Feng Shui, as represented by Yin and Yang. A good balance is obtained through a clear vision and intention when designing a space and giving it a specific purpose. Your vision has to be achieved with balance in every element. Flow, colours, materials, and including natural elements.

This concept is especially important for the next two points, as Feng Shui, in its origins, aims at finding the balance in the two principles I’ll describe next. And this is where we go more in-depth into the Chinese tradition.

The five elements dominate the universe and can be divided themselves into Yin and Yang. While Wood and Fire are Yang (or masculine), metal and water are Yin (or feminine). All the elements are intertwined and through the earth form an endless cycle which represents another foundation of Feng Shui.

People use the five elements to explain the interaction between various qi energies, forming a pattern of mutual generation and restraint of qi. Every object contains its balance within the five elements, and each one affects its surroundings. So one should always look to find the best balance for each space overall, but also in every room, depending on its function. 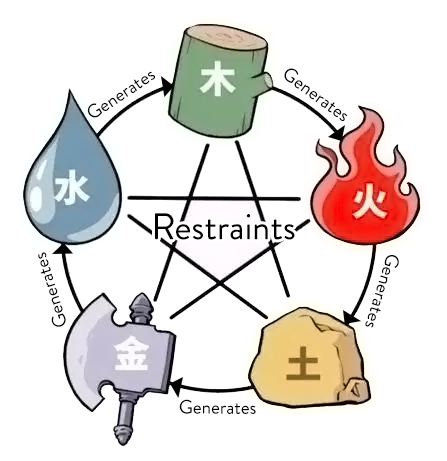 Metal generates water, water generates wood, earth restrains water, water restrains fire. In terms of space division, in a house the bathroom is water. As for the rest of the rooms in terms of objects, fish tanks, decorative paintings with water ‘are water’. Blue and black objects also represent water properties to a certain extent. People who are short of water in the five elements can raise fish or aquatic plants at home to improve this aspect.

Wood generates fire, fire generates soil, water constraints fire, fire constraints metal. Red, orange, yellow, heating, luminous, lamps. All these items and colours belong to the element of fire, which can affect the magnetic field of the surrounding environment. If there is a lack of fire in your interior you can increase the light sources and use warmer tones or accents to strengthen this element

Earth generates metal, metal generates water, fire constraints metal, metal constraints wood. All the metals, gold, bronze, sharp utensils, white colour tones, and metallic objects in the house are all part of the metal element. The simple choice of a white home environment is very suitable for people who are short of metal in the five elements.

Fire generates soil, earth generates metal, wood constraints earth, earth constraints water. Earth represents ceramics, stone, pottery, and other similar objects in a house. It is interesting to know that according to Feng Shui, small items, bits and bobs are considered of earth element too. But, according to tradition, an excess of such items can easily form evil spirits, which would hinder the flow of energy. Therefore, it is best to keep your home clean and tidy, bright and airy, bringing us straight back to the first two points. In addition, wood can restrain earth. So, putting these objects in a wooden cabinet could be a good strategy.

In ancient times, the Eight Trigrams (八卦 - Bāguà ) or Diagrams assigned directions and order. Each diagram position represents a wide variety of different meanings closely related to people’s daily life. But the main meanings can be simplified as in the octagon image below. It is an extraordinarily complex matter, but I will try to list below a part of them.

The interesting part is that you can overlap this octagon on your home layout and then you will know the direct connection between your home and life areas. Though, it must be kept in mind that these are also inspired by an extremely old tradition and to the layout of ideal Chinese residences, they were not formulated according to our lifestyle. So, they should be adapted to today’s standards (where possible) in a modern home. 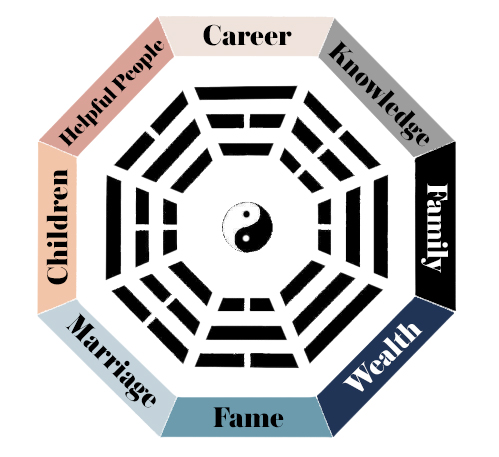 The trigram is called Qian (乾), representing the heavens, the fathers of the family, and the number six. It belongs to metal, and is related to life and the people around you. Especially for those you work and travel with, people helpful in your life. This position is suitable for people that will give you advice you should listen to.

This trigram is called Kan (坎), representing the man and the number one. It belongs to the water, commonly known as "the mountain of wealth", and is linked to wisdom. It is related to school, work prospects, and prosperity.

This trigram is called Gen (艮) and belongs to the earth and represents number eight. It is commonly known as the descendant mountain. It represents academic knowledge and helps personal development and skill learning.

This trigram is called Zhen (震), representing the eldest man and number three. It belongs to wood. This space can affect family relationships and health.

This trigram position is called Xun (巽) and represents the eldest daughter and number four. It belongs to wood too. It is related to prosperity and wealth and it should be exposed to water as well.

This trigram is called Li (离), representing the woman, and number five. It belongs to fire. There should be no mountains, highlands, or tall buildings to the south. High objects blocking the light would hinder the fame and reputation of a house, in turn reducing the family growth potential and luck.

This trigram is called Kun (坤), which represents the old mother and number two. It belongs to the earth and can give birth to all things. A good or bad layout could affect the fortune of the women in the family and the relationship between husband and wife. It is also related to the health of the family.

This trigram is called Dui (兑) which represents a younger girl and number seven. It belongs to metal. This space represents the children and their health. To this are connected also prosperity and luck.

All these concepts come from a centenary tradition. So, especially the 8 Diagrams philosophy should be adapted to a current layout. Stretching the diagram like in the simple scheme above could be helpful to adapt these ideas to your own space. 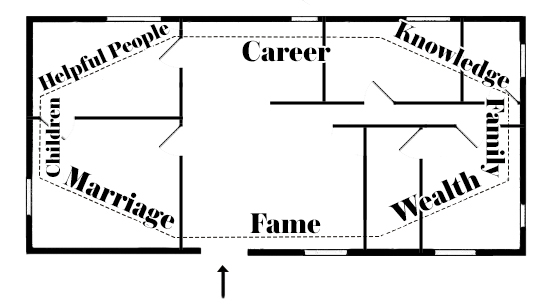 This is it for my brief introduction to Feng Shui. I hope was useful to understand some of its basic principles and philosophy. Unfortunately, today, being popular and ‘hip’ means that it’s become extremely widespread in Western countries. And with such popularity come a lot of misconceptions even from so-called experts.

The truth is that for how fascinating this discipline is, to fully understand it one should probably become a master in Chinese ancient literature and study for years before properly approaching it. So, while being aware of this and wary of the self-proclaimed experts, we can still slowly but steadily learn more about this interesting field and enrich and improve our daily life through a different vision of interior spaces.

No thoughts on “Feng Shui: What does it mean and how it is applied to Interior Design”